Overview of the issue

The TRCP has been on the front lines of sage grouse conservation for years. The decline of this iconic game bird of the American West indicates that sagebrush habitat is in trouble, and we care because sagebrush ecosystems are home to more than 350 different species of plants and animals, including such iconic game species as pronghorn antelope and mule deer.

Through effective activation of our grassroots network, the TRCP and its partners have bolstered the multi-pronged approach to sage grouse conservation that has kept the bird off the Endangered Species list. We were strategically engaged with outdoor and national media hungry for grouse information. We also helped stop congressional opponents from derailing the process. Finally, we successfully advocated for strong agency funding to implement critical conservation plans.

But now the future of these plans is in limbo. For a refresher on how we got here, scroll through our timeline of sage grouse conservation milestones.

A History of Sage Grouse Conservation in the U.S.

A Turning Point in Hunting’s History In 1900, the Lacey Act is signed into law, ending market hunting in the U.S. Each state becomes responsible for the management of its sage grouse—along with all other fish and wildlife species—and the establishment of hunting seasons and bag limits.

An Icon Urges States to Get Real William Temple Hornady publishes his “Save the Sage from Extinction” bulletin, which calls out the states for excessive sage grouse hunting seasons and bag limits.

Robert L. Patterson leads the first comprehensive study of the several species of Western grouse  and publishes his seminal work, The Sage Grouse in Wyoming.

Even 40 years before the first thought of pursuing extra protections for the species, the Western Association of Fish and Wildlife Agencies recognizes the value of sage grouse and the need for more scientific study by establishing a Sage Grouse Technical Committee to coordinate management, research, and information sharing among the states. Over the course of four years, the U.S. Fish and Wildlife Service receives eight petitions to list the greater sage grouse as threatened or endangered in all or parts of the bird’s range.

The Fish and Wildlife Service determines, for the first time, that the sage grouse does not warrant protections under the Endangered Species Act.

Facing legal challenges, the Service agrees to revisit their 2005 decision not to list the sage grouse for Endangered Species Act protection.

Wyoming Governor Dave Freudenthal signs the first executive order on sage grouse to come from a state leader and begins implementing a unique core area strategy to conserve the greater sage grouse and its habitat.

Sage Grouse Are In Line Behind Other At-Risk Species

The Fish and Wildlife Service determines that the sage grouse deserves protection under the Endangered Species Act, but while other higher-priority species take precedence there is no timeline for a final listing decision on sage grouse.

The District Court in D.C. orders the Fish and Wildlife Service to make a final listing decision for the greater sage grouse by September 30, 2015. Bi-State Grouse Are Not Listed

The Bureau of Land Management releases its final conservation plans for the greater sage grouse and amends 98 resource management plans across the West.
LEARN MORE >

Sage Grouse Not Added to Endangered or Threatened List Interior Secretary Sally Jewell announces that the range-wide population of greater sage grouse does not warrant Endangered Species Act protections, largely predicated on the strength of the collaborative conservation plans. This is a watershed moment for proactive, landscape-scale conservation!
LEARN MORE >

One Year Later, There’s Still Work to Do

A year after the milestone “not warranted” decision, bird numbers are up across most of the range—but it’s not what you think. The 63-percent increase in males attending leks is compared to record lows from 2013, and while ongoing conservation efforts are helping, the population increase is more likely tied to better precipitation across sagebrush country. Meanwhile, many of the states are implementing their conservation plans. Some, like Wyoming, have been doing it for several years, but others are barely getting started.
LEARN MORE >

Sportsmen Push Back on Weakening Conservation

The TRCP and outdoor businesses push back on congressional meddling with sage grouse conservation and push for swift implementation of the 2015 plans.
LEARN MORE >

The Science Community Speaks Out

More than 100 wildlife and natural resources professionals urge the DOI and BLM to stick to the science when considering any changes to federal sage grouse conservation plans. LEARN MORE >

U.S. District Court Judge B. Lynn Winmill rules that the Bureau of Land Management failed to fully analyze how sage grouse would be affected by changes in the amended land-use plans finalized in March 2019. LEARN MORE >

Judge to Determine Future of the Plans

The BLM releases six draft supplemental environmental impact statements for greater sage grouse plans across the West to address concerns raised in the litigation and Winmill ruling and injunction. Whether the judge accepts or rejects the BLM’s analysis will determine if sage grouse conservation can proceed according to the original plans or those altered during the Trump Administration. 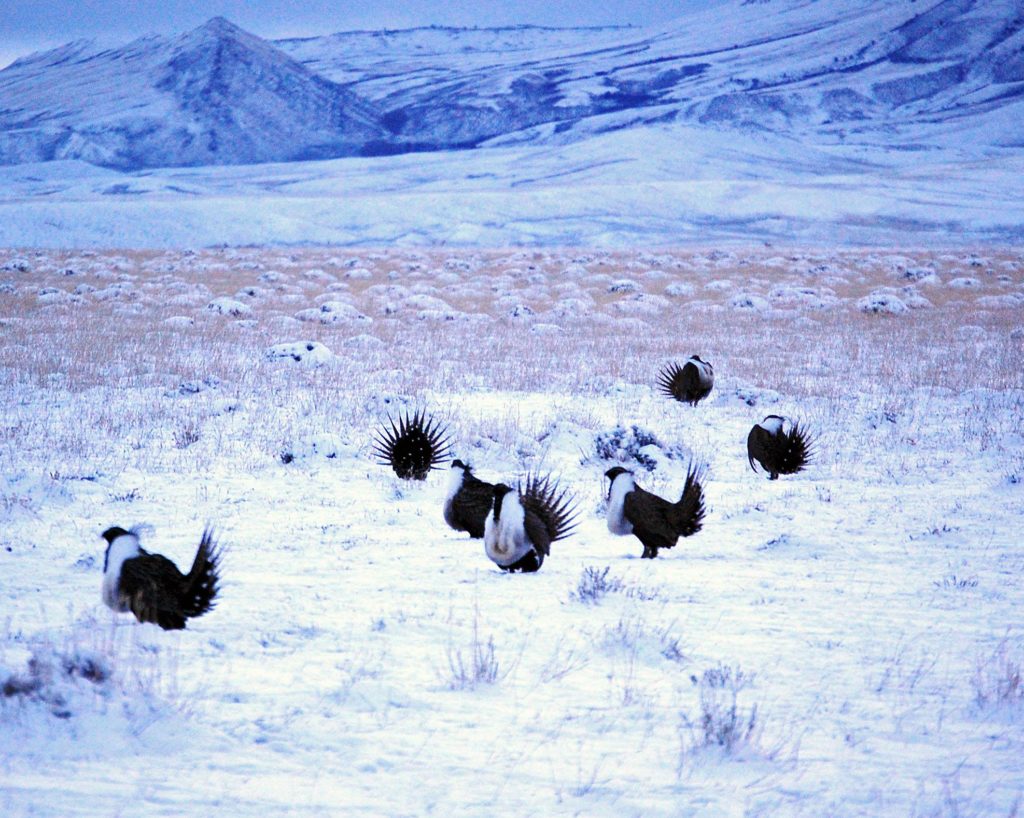 Compared to 2016, there are 30 to 60 percent fewer male sage grouse dancing on their breeding grounds across the 11 Western states leading into the spring mating season. LEARN MORE > Colorado closes sage grouse hunting in two of the best units in the state because of lost habitat and fewer birds counted for three consecutive years. Nevada offers 40 percent fewer special permits to hunt grouse on the Sheldon National Wildlife Refuge. Idaho, once a major stronghold for sage grouse offering liberal seasons and bag limits, now allows just one bird per day for either a 2- or 7-day season, depending on the unit. Oregon reduces the number of limited permits available to hunters for the 2020 season. And sage grouse hunting remains closed in parts of Wyoming, the Dakotas, California, and Washington. LEARN MORE >

The U.S. Geological Survey releases a report that shows sage grouse populations have declined 80 percent since 1965, and the annual rate of loss ticks up a full percentage point to 3 percent each year.
LEARN MORE >

Why does TRCP care?

The fact that a once common, widely distributed and liberally harvested game bird even had to be considered for listing under the ESA should concern all sportsmen and women. Also, the sagebrush sea is home to so many species we love to pursue – pronghorn, mule deer, elk and sage grouse. It plays a role in the region’s vibrant rural economy, way of life, and outdoor recreation opportunities.

The long-term future of sage grouse and the sagebrush ecosystem is still being shaped by the decisions we make today. Continued habitat loss and degradation, combined with the uncertainty of conservation plans that face political and legal challenges, do not bode well for the species or people that depend on the sagebrush sea. Leadership, adequate funding, and strong policies–for implementation of federal and state plans and continued private lands conservation programs–are all vital.

We cannot waver or be short-sighted. Conservation efforts for sage grouse will act as an umbrella and help conserve not just the 350 species of plants and animals across 11 western states, but also a sustainable and prosperous future for the West.

A Hunter and Angler’s Guide to the Omnibus Funding Deal