In 2007, the Theodore Roosevelt Conservation Partnership (TRCP) began the Sportsmen’s Values Mapping Project (SVMP) by working with sportsmen’s groups and the Montana Department of Fish, Wildlife & Parks to gather information about Montana’s most important hunting and fishing areas. The project was expanded to Wyoming in 2011 and was initiated in Arizona and Idaho in 2014.

Over the past three years, the TRCP has held 20 mapping events and gathered input from more than 420 sportsmen and women.

Idaho boasts some of the most diverse and robust hunting and fishing opportunities in the continental United States. From its inland seaport at Lewiston to above the timberline heights of Mount Borah, Idaho provides opportunities to pursue California quail, steelhead, bighorn sheep, and Arctic grayling. Guaranteeing all of Idaho’s residents and visitors with quality places to hunt and fish is the shared vision of the TRCP and many Idaho sporting groups. No matter how many deer, elk, sharp-tailed grouse, or steelhead we have, and no matter how many guns, bows, and fishing rods we own, if readily-accessible places to hunt or fish are not available, our sports may become a thing of the past. And today, unfortunately, human population growth and expanding development threatens the basic underpinnings of our nation’s wildlife conservation model and the hunting traditions enjoyed by thousands of Idahoans. The Idaho SVMP effort has gathered input from Idaho sportsmen and women about the state’s most valued places to hunt and fish. While information on critical fish and wildlife habitat has been compiled by the Idaho Department of Fish and Game, organized information on the areas that sportsmen value most for hunting and fishing has never before been gathered, until now. An area that is highly valued by sportsmen may not always be the area with the largest fish and wildlife populations, or the mountain range that produces the largest deer, but it may be a favorite trout stream that is close to home, a drainage where a deer hunter and his family have hunted each opening weekend for many years, or an elk hunting area for which it’s easy to draw a tag.

The maps are being used to help guide policy makers at the local, state, and national level to responsibly manage and provide continued access to highly valued hunting and fishing areas. They’re also helping to prioritize management actions and funding requests aimed at conserving and restoring highly valued wildlife habitat, or expansion of access.

Since 2014, the Idaho SVMP has been supported by a partnership of sporting organizations across Idaho. The first partnership mapping workshop occurred in June 2014 with the Idaho Chapter of Backcountry Hunters and Anglers. The Idaho State Bowhunters, Idaho Traditional Bowhunters, and Idaho Chapter of Safari Club International also hosted mapping activities where nearly 100 sportsmen participated in 2014. In 2016 and early 2017, the TRCP worked with Trout Unlimited, Ada County Fish and Game League, a variety of other conservation groups, and a number of individual sportsmen to complete data gathering.

All sportsmen’s input has been digitized and assembled in a geographic information system (GIS), then overlaid with maps of critical habitat, migration routes, land ownership, and other data to develop conservation and management strategies. Final sportsmen’s values maps have been made accessible to partner groups and key decision makers. 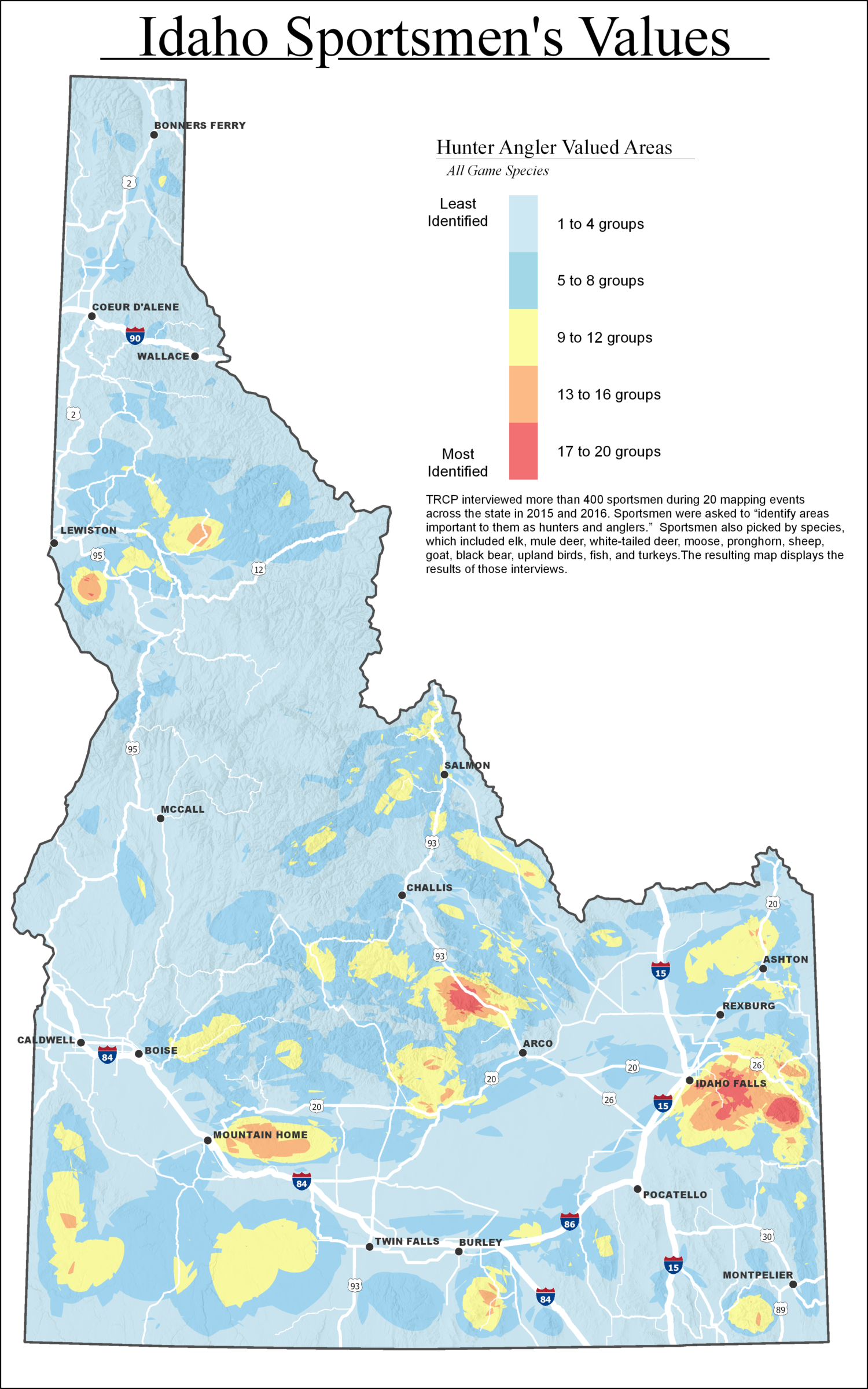